(Robert Kaplan, Conde Nast Traveler, Aug. 1998)“Ten days on Vancouver Island and Washington State… convinced me that the Pacific Northwest – both the Canadian and American parts – constitute the esthetic landscape and travel destination of the future, eventually to supercede even Europe. This amorphous region…I shall call Cascadia since it stretches out from the Cascade Range, and ignores national borders. As someone who has lived in southern Europe for almost a decade, I will lay out my argument more in resignation than in triumph”.

The Rainforests
“Paradise is a (cold) rainforest… Sword ferns and giant cabbage leaves were everywhere, in a plethora of luxuriant green shades. The bark of each tree was concealed under a mantle of velvety emerald moss. Labyrinthine draperies of lichen hung from the branches of western red cedars and hemlocks. Although I couldn’t see more than a few feet in each direction, I wasn’t claustrophobic… When the rain got heavy I took refuge in the hollowed-out trunk of a tree several hundred years old. From here I watched a Steller’s Jay land silently on a branch, its fabulous midnight blue clashing with the green background – the same bird first described by Meriwether Lewis(nope, Robert… they don’t call it “Steller’s Jay” for nothing – it was first described for science by Georg Steller during Vitus Bering’s Alaskan expedition in the 1740s) The mist, too, was a plus. In the forests of the Pacific Northwest the mist enhances and distills the quality of the landscape. Unlike the fog of the East, weighted with more heat and dirt, the fog here is a silken lacework, slipping over and falling off the hillsides, making their surfaces that more desirable… I found trees even wider than my car. Their trunks sparkled with moss, and their branches were cobwebbed with hanging lichen. The cool, sea-green dampness of the forest was delicious: a sort of glassy purity reigned. I felt as if I were walking on the bottom of an aquarium. The thin mist made the mountains look like reflections of themselves in smoky, sunlit glass. Looking at the spruces and other evergreens. I thought: These aren’t trees – they’re gods! No wonder totem poles became the principal means of artistic expression for the area’s native peoples.”

The Beaches
“I reached the beach, a hard-packed stretch of sand punctuated by black volcanic rock. I saw couples holding hands and people walking alone, deep in thought, but there were no crowds or even groups… Everyone was a lover of some sort – of nature, of solitude.”

The Mountains
“The Olympics are well named. They gather cloud formations as though the gods themselves resided on their summits. Everywhere I walked in the park, there were black tailed deer, unafraid of people. But it was the mountains themselves that gripped me, thickly clad as they were with the darkest steeplelike balsam fir. The escarpments were so steep that the base of one line of trees was near the top of the next. Beyond the tree line were sun-polished glaciers and summits that looked like crinkled tinfoil…with mountaintops appearing and reappearing through columns of fog.”

The Wines
“Like a lot of people a few years back, when I heard of Washington State wines, I laughed… But the rainy climate, combined with mild winter temperatures, makes for a long grape-growing season. Many of the regional wines, especially the rieslings, have become quite good. The marketing of them is even better…Countries with fine winemaking traditions but uncertain marketing and worse environmental records may not be able to compete…”

“This region of North America is utterly relaxing…without the motorcycle-exhaust roars and tailgate-prone, stressful driving of southern Europe. Moreover, it will stay beautiful. Meanwhile, the wine here will continue to improve…” 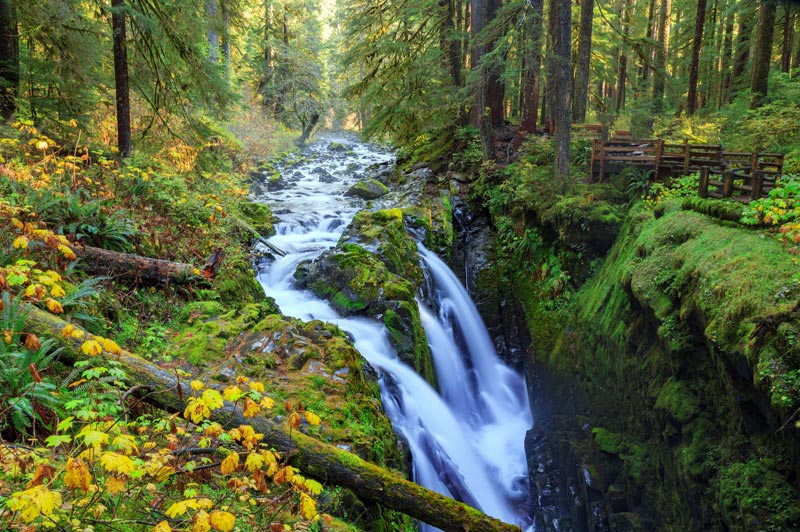